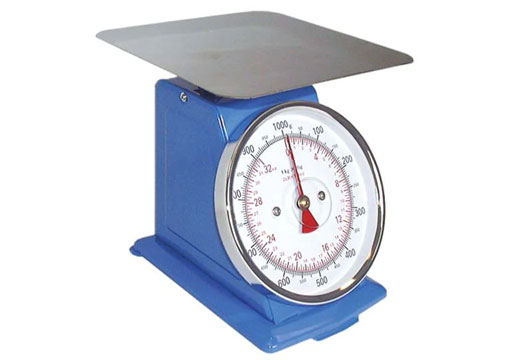 One pound is the equivalent of 0.453592 kgs. When you see the weight on the scale measured in pounds it can be difficult to convert the pounds to kilograms accurately without a calculator.

If a person weighs 142 pounds, they weigh 64.4101 kgs. Many people take a kilogram conversion by saying a 100-pound person would weigh approximately 50 kgs. That is really close to accurate but it is not exactly accurate, so if you need a precise number then you need to buy scales that have the ability to read your weight in grams and kilograms and not just in ounces and pounds.

There Are Two Methods You can Read Weighing Scale in Kilogram

On a pair of kitchen scales that are designed to measure in kilograms, you will find that between the numbers listed on the scale there are four small lines between each big number.

If you count the numbered line and the four lines between it and the next number you will see that there are five lines in total. Each of the five lines represents 200 grams so each mainline equals 1000 grams which convert to one kilogram.

Most digital scales will allow you to choose the unit of measure it reads the weight in. On some of these scales, there is a special selection button that allows you to change the unit of measure, and on other scales, you will use the power button to make the change between kilograms or pounds.

If you have a designated measurement selection button you will power on the scales and then select the unit of measure you wish the scales to reflect the weight in.

If you have to change the unit of measure using the power button then you will need to press the power button several times until it changes the measurement unit to kilograms instead of pounds. If you have difficulties in getting the scale to change you may need to remove the battery and let the computer sit without a battery for at least five minutes then replace the battery and power the unit on.

When changing the display on a set of scales the scales must be set on a flat and level surface just like they would need to be if you were weighing yourself. Make sure the area where you place the scales is hard, flat, and level then proceeds with the changes of unit measurement.

The following chart will also help you to read kilograms instead of ounces and pounds.

The choice to use kilogram or pounds measurements will normally depend on where the individual is from because the United States uses the pounds and ounces and European countries use the grams and kilograms. The choice may also be determined by the need to measure very small amounts of substances. When measuring in very small amounts generally grams are used instead of ounces.

Your choice to use scales that display weights in kilograms should drive you to purchase scales that have the ability to change weight measurements. This is a common feature on digital scales but when you are purchasing traditional mechanical scales the option to have them read in kilogram instead of pounds will not be afforded to you.

The new technology that is being used in scales has advanced scales so we get to set them to read in the unit of measure we like, and some of them can even be connected to our smartphones so we can get the weight measurement sent to our phones or tablets.